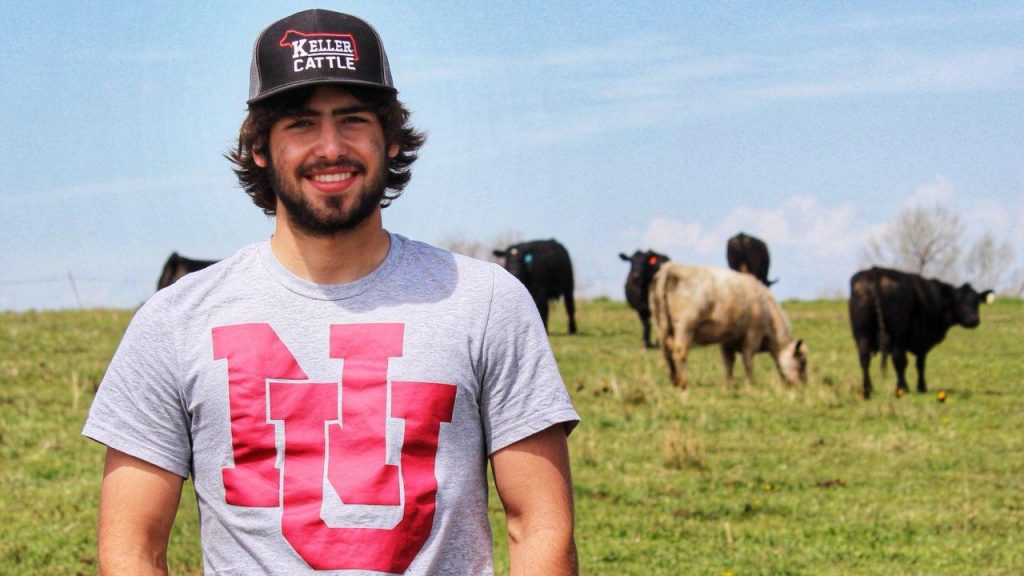 Dalton Keller raises cattle and forage crops just west of the Nebraska-Wyoming state line. He graduated recently as salutatorian of the Class of 2020 at the Nebraska College of Technical Agriculture in Curtis. He intends to transfer to the University of Nebraska-Lincoln this fall in animal science. Courtesy photo-NCTA

CURTIS, Neb.  – Dalton Keller is well versed in beef cattle and animal science so he decided that in his third year of college he would chart a different path.

Keller added skills in irrigation technology, electricity, ag mechanics, welding and ag safety to his program at the Nebraska College of Technical Agriculture in Curtis.

Why pursue the irrigation technician program?

“I just wanted to have some knowledge about center pivots,” Keller explains. “How they are set up, how they work, and to have enough knowledge that when I started farming I wanted to be able to repair one myself and not have to hire someone.”

Keller’s family recently purchased a small farm south of Torrington, Wyoming, where Dalton raises a couple dozen cattle, alfalfa and grass-hay crops. Both of his parents work for the local school district in Goshen County.

As an FFA student in Southeast High School at nearby Yoder, he was active in livestock judging, ag mechanics, and then caught the bug for showing club calves.

Through FFA, he was trained in beef cattle artificial insemination and worked with a custom AI crew during breeding seasons. Keller also continued showing cattle, fitting and grooming, and learning the ropes of the cattle business throughout his high school career. Then he set his sights on college.

“I knew that I wanted to be involved in the cattle industry,” Keller said. “I checked around a lot and found that NCTA had what I wanted the most for college.”

He received an associate of applied science degree in livestock production plus the 1-year certificate in irrigation technology.

Next fall, if on-campus classes proceed as currently planned by the University of Nebraska-Lincoln, Keller will pursue a bachelor’s degree by transferring in animal science to the UNL College of Agricultural Sciences and Natural Resources. The CASNR program is a 4-year partner to NCTA’s 2-year campus.

As an NCTA Aggie, Keller continued to travel to cattle progress shows, including the National Western Stock Show in Denver in January. He also enjoys helping at bull and female sales and processing livestock for producers.

During college, he was employed at Arrowhead Meadows Golf Course across the highway from NCTA. He also was seasonal help for an area rancher, sometimes working cattle but more often helping control the invasive eastern red cedar trees growing in pastures and canyons of the Medicine Valley.

Campus activities as an Aggie student were focused on his coursework. He was a member of Collegiate Cattlemen and Collegiate Farm Bureau.

When the coronavirus pandemic caused colleges to switch to remote learning, the transition was a challenge for hands-on activities. Keller credits NCTA professors for swiftly adjusting their teaching styles. He finished his final eight weeks of classes online in Wyoming, about 250 miles away from campus.

“It (remote classes) was a big change for me,” he admits. “I would go out and work all day on the farm, then come in at night and sit down before I went to bed and get to my assignments.”

Fortunately, he says, he took a lighter load of 12 hours this semester, expecting to be traveling to more cattle shows and away from campus on weekends in March and April. That all changed with COVID-19.

“So I was happy to get done what I had done before this year,” he adds.

For the first two years at NCTA, Keller says he took advantage of enrolling in every animal science or livestock class that he could, including a comprehensive capstone course required for livestock, equine and crops production majors.

In the capstone course, students write a business plan after researching all facets of a ownership/production enterprise. Students also cover topics such as legal issues for business, land and animal ownership. The course couples assignments in ag economics and production management, helpful for his family’s business marketing club calves as Keller Cattle.

Keller had received an NCTA Dean’s Scholarship when he started as an Aggie in August, 2017.